On Monday, January 28th, Ben Frisch’s Statistics class was offered the opportunity to help the NYC Department of Homeless Services conduct the Homeless Outreach Population Estimate (HOPE). HOPE relies on thousands of volunteers to canvass parks, subways, and other public spaces to count the number of people living unsheltered in the city. The information gathered by volunteers during HOPE 2013 is critical to the city’s ongoing efforts to fight homelessness.These figures help determine need and establish progrms and budget allocations. The annual survey also helps the Mayor’s office track the stats of homelessness in our city.

Our task was to patrol assigned blocks in groups of three, asking census questions to each person we came into contact with, and recording those results for the information of the HOPE Foundation. All answers were confidential, unless the interviewee at hand needed help. To add to the excitement of this project, the survey was to be conducted at night, between the hours of 12 AM to 4 AM.

We showed up at our assigned Greenwich Village training location at 11 PM and learned more about the nature of the program, how to ask our questions, and what to do if we found ourselves in dangerous situations. Volunteers were to disperse throughout the city, to all five boroughs. At midnight, we took the subway to our assigned Midtown locations and got to work. This task was especially pertinent to our Stats class because we’d been learning about what characterized a proper, fair sample and how to a simple, random one. We knew the importance of the census data we were planning on taking, so we wanted our sample to be as unbiased as possible with a very low margin of error. All people needed to have equal chance to be chosen for the census questions. We knew we needed to avoid bias (or false values based on polling choices) by sticking to our proper routes and not simply conducting surveys based on our own convenience. We knew we needed to ask each person the survey questions, no matter whether or not we thought we could tell in advance if they were homeless. Those would have been some sources of bias that we were wary of avoiding.

The actual conducting of the survey proved very interesting. Though we walked in the cold for over 3 hours at night, the work was enjoyable. As we were in a sketchy neighborhood at a sketchy time, my favorite part was talking to people I was initially nervous talking to. I liked seeing how gentle, charismatic, and nice strangers on the street were when I asked them questions and how willing they were to help out with our project. Though I hope not to be walking through Midtown at 3:30 AM any time soon, I feel as if I conquered some sense of fear through this project. The results of our data will help the city account for what more they can do to aid the issue of homelessness, so I know our work was beneficial. The loss of sleep was worth it for the edifying experience of conducting this survey at night. I particularly enjoyed the connections to what I had been learning all semester in class. It was great having a chance to see Stats played out in the real world. 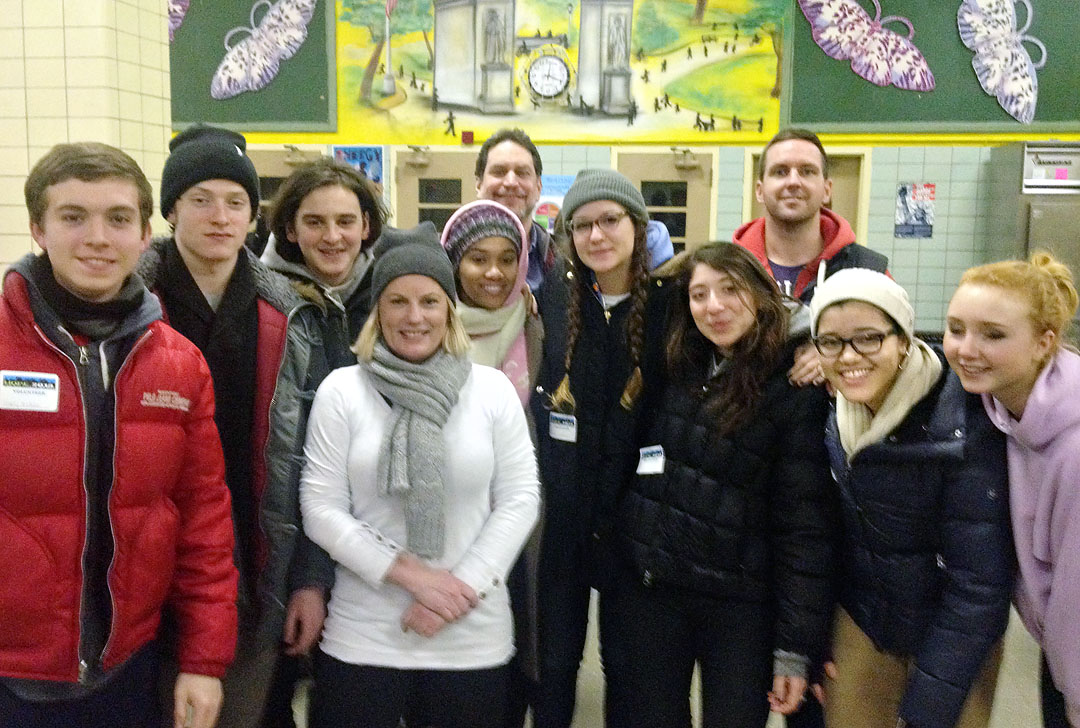 Volunteering with Generation On at PS 57 in East Harlem on Martin Luther King Day was a different sort of service experience. I, along with a group of other Friends students, acted as a “volunteer leader,” leading tables at which members of the East Harlem community could complete service activities (like decorating bracelets or scarves for children with HIV/AIDs, making toys for dogs and cats in a nearby animal shelter, or putting together scrapbooks describing the importance of MLK day).

Our role in the service wasn’t directly “serving;” rather, it was helping other people, people possibly less exposed to the idea of service than we are, do their own service for the community — but what we were doing, helping others serve, was in itself a sort of service. This whole multi-layered, serving-by-helping-others-serve concept was what made my experience with Generation On really unique. I didn’t feel the whole time like the community members necessarily needed my help — the activities were for the most part simple and straightforward. Nonetheless, I found it gratifying to play whatever small part I did play in helping others give back to their community.

I had so much fun volunteering at Grand St. Settlement.  The seniors were engaging, witty, and lively.  There was one senior in particular who came up to dance as we were singing.  Tucker’s surprised face was priceless as she danced over and gave him an enthused hit on the chest.  Another member came up to the choir and led us in a song.  I assisted a very sweet member of Grand St. Settlement as we made paper snowflakes.  I taught her how to fold paper hearts and she taught me how to make paper reindeer, a process I will probably use next holiday season.  I was touched when the senior I worked with took one of the snowflakes I made and slipped it in her book to decorate her room with.  The seniors were so sad when we had to go, but I knew after all the fun I had that day I would definitely come to volunteer again.

Over Winter Break, I volunteered at Room to Grow on 21st and 6th avenue. Room to Grow is an organization that benefits children from birth to age three who are born into poverty. Families who are served by room to grow come into the office once every three months until their child turns three. Visits consist of appointments and discussions with the Room to Grow social workers, as well as a chance to collect various baby items, such as clothing, toys, books and strollers. Room to Grow collects such items through donations.

It is great to see how many donations Room to Grow receives on a daily basis. Because it receives so many items, volunteers are needed to sort through and organize all of the donations so that the Room to Grow families can easily browse and select the items of their choice. When I volunteered at Room to Grow, I sorted through bags of clothing and took inventory on all of the items. When I had finished taking inventory on a bag, I placed all of the articles of clothing into the appropriate bin (for example, boy or girl, age group, winter or summer, etc.) I was also responsible for making sure none of the articles of clothing were ripped or stained. If this was the case, the clothing was put into a separate bag that was taken to a textile recycling company.

Room to Grow is a wonderful organization that provides so much more to impoverished families than just clothes and toys. Families can come in and get the support they need regarding their pregnancy as well as their child’s development for the first three years of life. The facility is warm, cozy and welcoming, and it was great to be able to help out at such a nice place.

This summer, I worked at a program called Horizons at Brooklyn Friends School. Horizons is a summer enrichment program that helps kids from low-income families get an education over the summer, thus preventing the “summer slide.” Over the summer, children from lower income families, who don’t have as great an access to books or supplementary education, regress a few months in learning while children from middle income families only regress slightly. This disparity between the two, also known as the “achievement gap” widens over time, and by the fifth grade, a child from a low-income family can be up to three years behind a
middle-income child. Horizons offers art, music, and swimming classes as well as the
academics, so each child can have a well-rounded summer.
I worked at Horizons for a month, spending most of my time with third graders, although I worked with the first grade and kindergarteners as well. I was a counselor, which they called “volunteer” and I supervised and played with the kids during their free time and their non-academic classes, though each grade varied in terms of how much I helped them. The third graders did not usually require any help from me or the other volunteers during their academic classes (there were two a day) but the first graders and kindergarteners needed constant attention no matter what they were doing. When we went swimming, every Monday, Tuesday, and
Thursday, the volunteers and teachers would get in the water and help the kids swim. This was a lot of fun for the teachers and the kids; some kids would never want to get out while others made you swear you wouldn’t let go of them before jumping off the platform. I became very close with the kids, despite our many differences. One student in my third grade class had never known anyone who was Jewish, and was astonished that I wasn’t dressed in a long skirt and tights like an orthodox woman. He was also surprised by how similar we were, even though we were different religions. Another student was from Gambia in Africa and was still adjusting to life in New York City.
Horizons taught me how much I love working with children and how to deal with them. While I taught them games (such as Bananagrams and volleyball which they grew to love) and about Judaism, they taught me so much as well. They taught me how to talk to children, how different a kindergartener is from a first grader, how to be nice but not a pushover, how to maintain order, and so much more. I heard about their families and some of their struggles. I learned about how many of them owned large flat-screen TVs or cool gadgets but lived in public housing. Shianne, a third grader, told me about her father’s trouble in finding work and how she loved it when he was a construction worker for the MTA and she wanted him to do that again. Kaddyjah, another third grader, told me about how she used to live in Gambia, Africa and how she wants to go back. I think it is so important to give back because of how much you, and whoever you help, learn. Before Horizons, I didn’t know any low-income children and now that I do, I can say that they are more like me than I would have ever guessed.